Resurfacing corrects the alignment of the rails to make them smooth, minimizing the jerks and bumps experienced by passengers and reducing the mechanical strain on the rails.

In the past, this work was done by hand. Teams of workers called “gandy dancers” used levers to force the rails back into place and correct the gradual shifting caused by the force of passing trains.

Today, Caltrain crews use modern machines to compact the ballast and straighten the track. Caltrain usually uses a five-man crew to operate a tamper, a regulator and track stabilizer.

The tamper is self-propelled. During the operation, the tamper lifts the track, vibrating heads penetrate and compact the ballast under the ties, and the track is aligned and placed back down on the ballast. 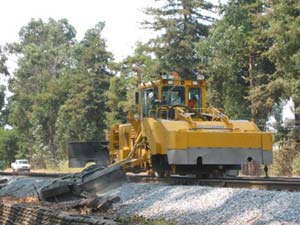 After the tamper has finished, additional ballast may be needed along the tracks. A regulator with a plow, wings and a large rotating broom distributes the ballast and smoothes the track bed.

Finally, a track stabilizer applies a combination of vibration and weight to compress and level the track. 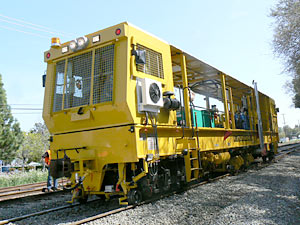 You can now receive Caltrain news via e-mail!
Subscribe now!

Caltrain Twitter is human-operated M-F, 7am to 7pm, excluding holidays.